Step into a time machine that will take you back to the period during Watergate, disco dancing as well as times before, and when you do you’ll find yourself standing in the McGill Drug Store and Company. McGill Drug Co., which stands on the east side of U.S.93 in downtown McGill, 12 miles north of Ely, is an old small-town drugstore frozen in time. 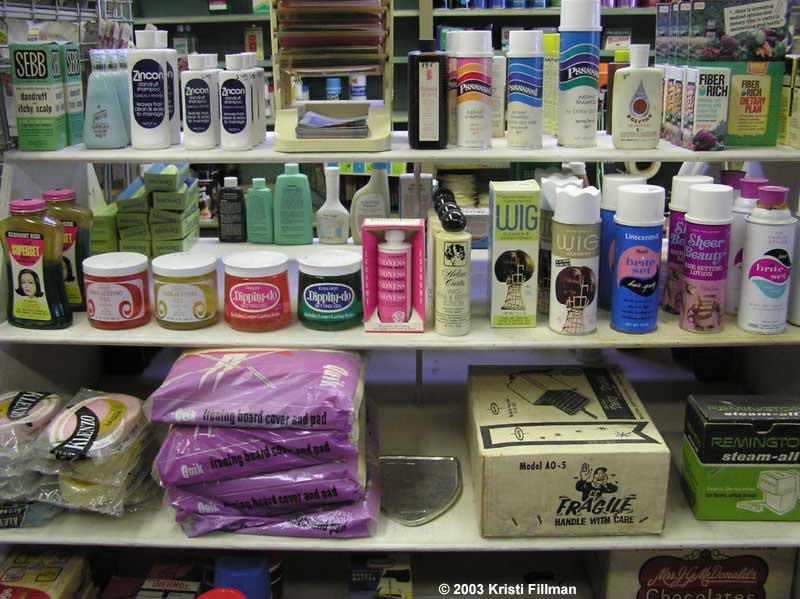 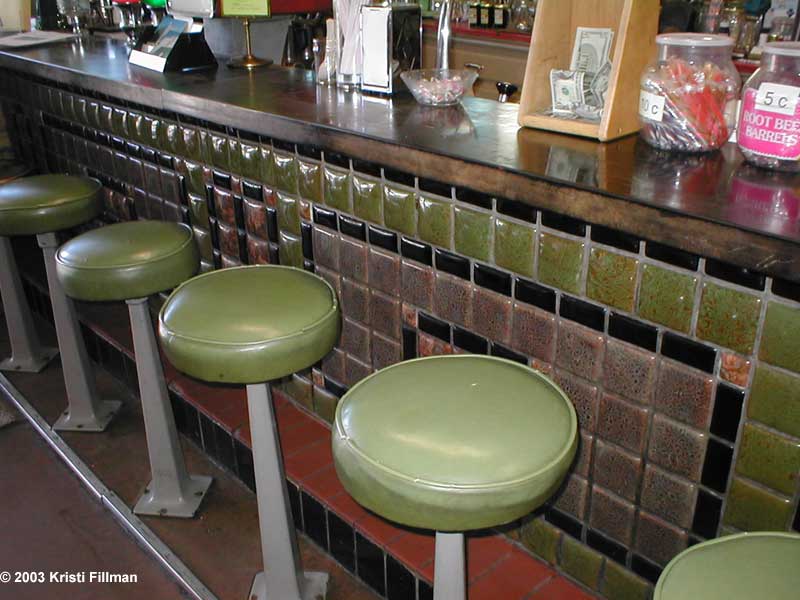 Brand names whose luster faded decades ago remain on the stores’ shelves. Tubes of Ipana toothpaste sit across the aisle from jars of Dippity-do, an industrial-strength styling gel used to hold woman’s hair in place several inches above her head. Customers purchased not only manufactured drugs but also home remedies and prescriptions, many of which were mixed in the store.

In 1906 construction began on a mill and smelter at the present site of the town of McGill. In 1908 the Nevada Consolidation Copper Company decided to build a company town to house its employees. Approximately the same time the Steptoe Drug Company built the drug store. The corrugated steel-on-frame construction was typical of commercial buildings in western towns around the turn of the century. It was relatively fire-proof and that was an asset. 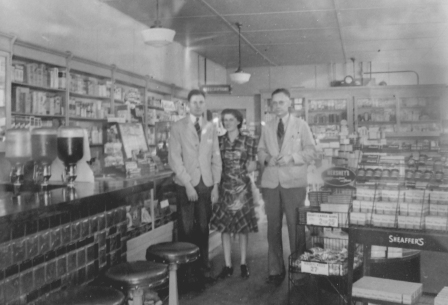 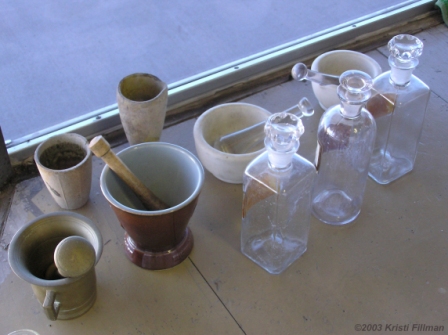 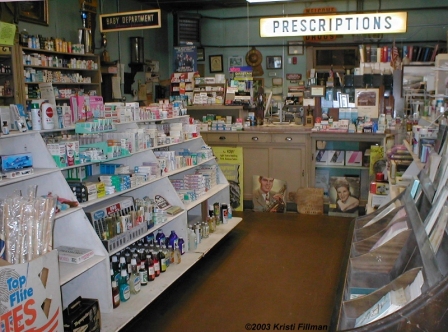 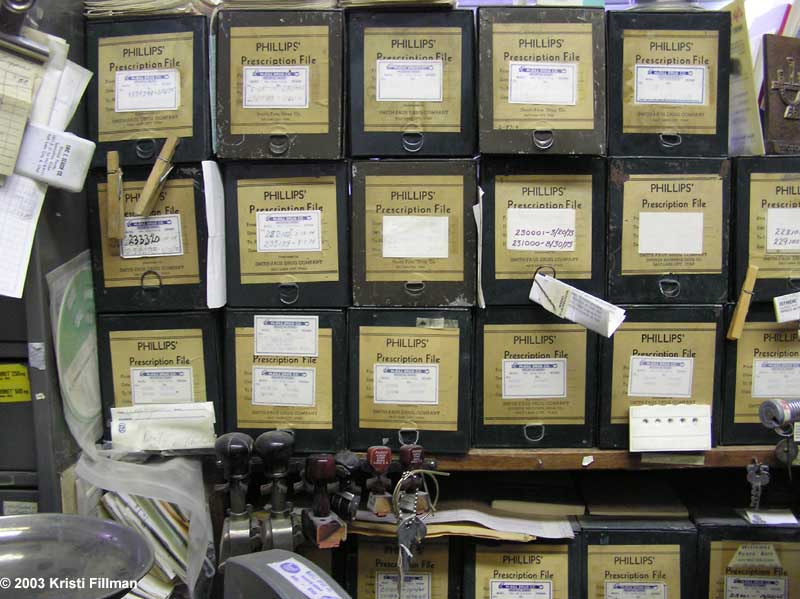 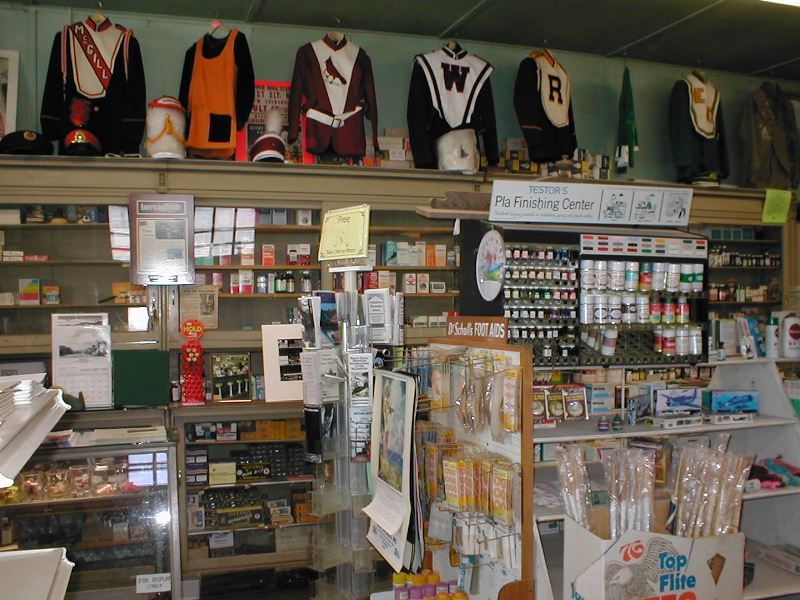 The mining company was strictly segregated along economic and social lines. Socially, McGill was divided into various ethnic neighborhoods. The McGill Drug Store and the Post Office were the only two establishments in the town that everyone, regardless of social status, frequented and felt comfortable doing so.

Our records do not indicate who the first pharmacist was, but they do show that Nick Thomson was there from 1918 until 1924 and that he gave on-the-job training to C.L. Fleming who stayed until 1933. In the late 1930’s Gerald “Jerry” Culbert became the pharmacist, in 1954 he became a partner in the store. By the mid 1950’s Gerald and Elsa, his wife, had become sole owners of the business.

In 1979, when Gerald passed away Elsa closed the pharmacy, but kept a portion of the store open sporadically for a few years. Very little of the 1979 inventory was sold. By the mid 1980’s the store was closed permanently.

On November 3, 1995 the Culbert’s sons Michael, Steven and Danny gave the Drug Store and its inventory to the White Pine Public Museum for historical preservation and display.

There is an even more important reason for preserving the store. Drug stores such as McGill were common and taken for granted by the public. Now, when medical historians and medical anthropologists would like to understand the importance that these establishments had on our culture, they find they are no longer in
existence. Those that do exist have usually been modernized.

Thus, the McGill Drug Store is a time capsule. Even though it closed in 1979, as you look around, you will notice that some of the products date as far back as the 1950’s. Of even greater importance is the fact that every business record, every invoice and every prescription filled, as far back as 1915 has been maintained. The opportunity for research is unparalleled.

Funding depends on membership fees, donations, our gift shop sales, and grants. Volunteers and two part-time staff operate our museum. School field trips are welcome and can be scheduled by calling the museum.

Sign up to receive our E-newsletter.  We send out just a few emails each year.  You can unsubscribe at any time and we will not share your email address with anyone.

Need something?  We are here to help.

This institution is an equal opportunity provider and employer.

If you wish to file a Civil Rights program complaint of discrimination, complete the USDA Program Discrimination Complaint Form, found online at http://www.ascr.usda.gov/complaint_filing_cust.html, or at any USDA office, or call (866) 632-9992 to request the form. You may also write a letter containing all of the information requested in the form. Send your completed complaint form or letter to us by mail at U.S. Department of Agriculture, Director, Office of Adjudication, 1400 Independence Avenue, S.W., Washington, D.C. 20250-9410, by fax (202) 690-7442 or email at program.intake@usda.gov.